The Flat Earth Society declares, “Throughout the years it has become a duty of each Flat Earth Society member to meet the common Round Earther in the open, avowed, and unyielding rebellion; to declare that his reign of error and confusion is over; and that henceforth, like a falling dynasty, he must shrink and disappear, leaving the throne and the kingdom of science and philosophy to those awakening intellects whose numbers are constantly increasing, and whose march is rapid and irresistible.” Can their claim, that the world is flat, possibly stand up to critical thinking?

Sources used in this discussion include the Plane Truth, Atlantean Conspiracy, and Flat Earth Society websites.

Flat Earthers believe that land and water rest on a circular disc surrounded by a 150-200 foot wall of ice, therefore no ships fall off the edge (this is Antarctica, no longer a solid mass on the pole of a sphere, but rather a ring around a 2-D plane).

Abandoning the idea of a heliocentric solar system, the sun and moon are said to orbit above the disc.

According to the Flat Earth Society, the distance across, or diameter, of the flat earth is 25,000 miles (at least, that is the “known world,” the “area of land which the light of the sun affects,” but the earth is “physically much larger”).

(The globe is about 7,900 miles in diameter, from surface to center to surface on the opposite side.)

Necessarily, Flat Earthers believe those who advocated (and advocate) a spherical earth either erred or were part of a conspiracy to keep the truth of a flat earth hidden. Evidence that the world is round is either wrong or fake.

Antarctica: The Inconvenience of Math and Sailors

Let us first consider the ice wall surrounding the disc. The Flat Earth Society says of the wall:

How far the ice extends; how it terminates; and what exists beyond it, are questions to which no present human experience can reply.

Assuming that the world is flat and such an ice wall exists, the size of such a ring can be easily determined, using the diameter Flat Earthers trust. If 25,000 miles is the distance across the flat earth, the ring must be about 78,540 miles long (C=Dπ).

Were a Flat Earther to venture outward (on the disc) and encounter Antarctica/the ice wall, he or she could travel along the coast and traverse, if flat earth theory is correct, 78,540 miles before reaching the starting point again.

If only there were individuals from multiple nations, some independent of governments, who over centuries had circumnavigated Antarctica to reveal its true dimensions!

One could also study people like Jon Sanders of Australia (1982) or Fedor Konyukhov of Russia (2008), men who circumnavigated the south pole alone, nonstop and unassisted.

Or perhaps a Flat Earth theorist could investigate (and join in) the Antarctica Cup, a yacht race around Antarctica. People who circumnavigate the continent are alive and available to interview.

Each circumnavigation revealed the same thing: Antarctica is roughly 11,160 miles in circumference (with sea ice extending out several thousand miles more). Not 78,540. If it was an ice wall around the disc, the diameter of the world would have to be not 25,000 miles, but rather 3,550.

That’s about the distance from New York to France.

Also, though Ernest Shackleton’s famous 1915 attempt to cross the continent on foot failed, explorers succeeded after him. Britain’s Vivian Fuchs and New Zealand’s Edmund Hillary succeeded (1957-1958), as did Boerge Ousland of Norway (1997), Cecilie Skog and Ryan Waters of Norway (2010), and Felicity Aston of Britain (2012).

Conspiracy theorists could cross it themselves, if they so decided (they commonly say it’s too heavily guarded by government militaries, an exaggeration that also assumes governments are devoting the massive resources to and effectively protecting a 78,540 mile strip).

But one might suppose they would insist “crossing” the continent would in reality be a manipulation, nothing more than traversing a rounded protrusion in the ice wall. Perhaps a yacht would be a better idea. 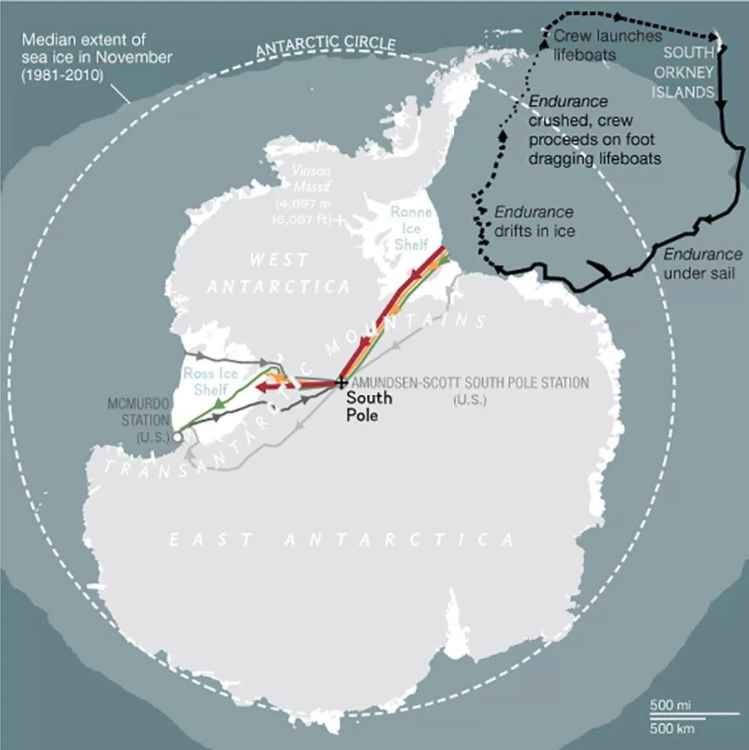 Flat Earthers could of course say all the voyages of the past two centuries were a grand hoax, akin to the alleged moon landing hoax of 1969, but there is of course no evidence for this.

Each person involved would have had to either be silenced with perfect efficiency (upon discovering the world is flat and enclosed in an ice wall) or an agent intimately involved in a multinational conspiracy to hide the truth from all.

Much of the flat earth debate has to do with perception. Eric Dubay’s “200 Proofs Earth is Not a Spinning Ball,” popular among Flat Earthers, begins there:

The horizon always appears perfectly flat 360 degrees around the observer regardless of altitude. All amateur balloon, rocket, plane and drone footage show a completely flat horizon over 20+ miles high. Only NASA and other government “space agencies” show curvature in their fake CGI photos/videos.

As all governments, for some wildly strange reason, want to keep the earth’s flatness a secret, any nation (and now private companies like Space X) that journeys into space creates forgeries to fool the masses.

Not difficult to understand, yet understandably not quite good enough for a conspiracy theorist.

So consider that a ship coming over the horizon doesn’t change much in perceived size from the moment you see the top of the sail to the moment you can see the full bow. That phenomenon would not be possible if the world were flat. It is because the ship is traveling on a curved surface that the size remains relatively the same from appearance to full view (as it is approaching, it does grow a bit larger).

Were the world flat, the ship would become visible on the horizon immediately: there would be no emerging from below the horizon. It would be a pinprick in size, and would continue to rest on the horizon as it approached, growing in size. Further, the height of the point on which you stood would not matter (on a globe, if you stand at a higher point, you can see the ship sooner than someone below).

These truths can be tested small-scale, or observed in real world scenarios, without much difficulty by any conspiracy theorist.

Likewise, an experiment with shadows is available for all to try. Remember Eratosthenes?

He realized that rays of sunlight are hitting Earth at the same degree, but because Earth has a curvature, the length of shadows at different locations across Earth aren’t the same.

Consider a curved object and its light source. Placing identical markers on different spots on the curved object (the side illuminated by light) will yield shadows of different lengths. Were the sun orbiting above the surface of a disc, shadows would be the same length. This phenomenon is easily replicated at home, using markers on both a flat surface and round surface and shining a single light source on each. 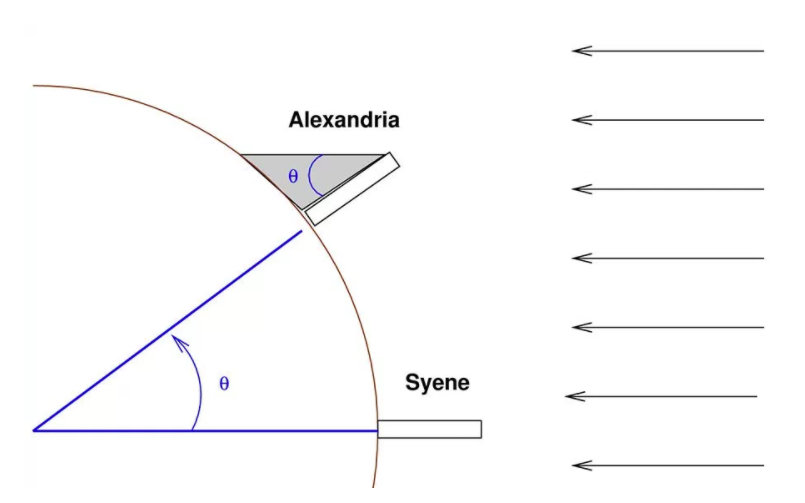 via Rochester Institute of Technology

Dubay writes, however, that “lunar eclipses have happened and continue to happen regularly when both the Sun and Moon are still visible together above the horizon,” so the whole explanation for the eclipse must be fraudulent. He decides against mentioning that phenomenon as it is understood through scientific study (atmospheric refraction creating a selenelion; our atmosphere functions like a lens that can make astronomical objects appear higher in the sky than they actually are, which is why what Dubay describes only occurs just before sunset or just after sunrise).

Finally, consider the sun. Looking at the flat earth model above, one might wonder why the sun is too weak to light the entire disc at all times. Conspiracy theorists explain that the sun is much smaller than it is claimed (Dubay mocks the idea that the “Sun is actually 400 times larger than the Moon and 400 times farther away! You can clearly see they are the same size”).

Pretending for a moment that the earth is small enough to only light a portion of the flat world at a time, one might wonder why the sun seems to rise and set without changing size. Perhaps if the sun orbited not above but around the disc (from lighting heads on a quarter to tails and then back to heads), the sun would disappear over the horizon of a flat earth with no change in perceived dimension.

But in the model above, at what location can you stand where the sun will appear to plunge into the surface of the earth without shrinking? Flat Earthers explain sunrise and sunset by saying the sun is simply moving farther away from your location and thus disappears at the vanishing point on the horizon, conveniently forgetting that objects diminish in size as they move away from you, eventually becoming infinitely small as they touch the horizon.

The sun appears the same size to us on a round earth high in the sky as it does on the horizon, unsurprising as we are the same distance from the sun at both noon and sunset.

Popular Science offers other issues to be considered. 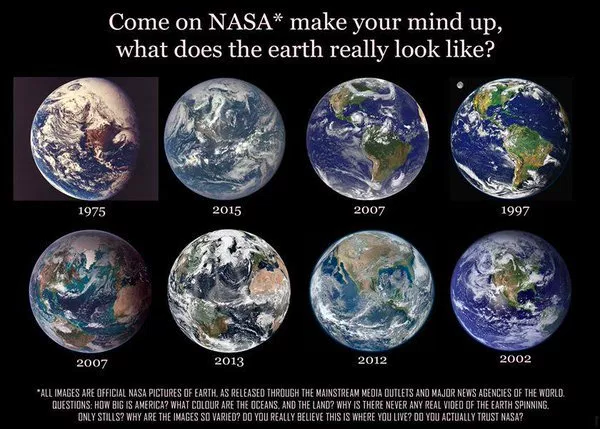 A pattern begins to emerge with conspiracy theories.

Many conspiracy theories, it seems, rely on the assumption of remarkable incompetence on the part of the powers attempting to hide the truth or perpetuate fraud. So NASA was somehow stupid enough to not include stars on their movie set of the 1969 moon landing. The U.S. government was dumb enough to demolish Building 7 in the evening of 9/11, when it had already demolished the World Trade Center in the morning, a pointless and risky redundancy!

Flat Earthers believe that the inconsistency of earth’s appearance in photos released by NASA show NASA is making effective use of Photoshop. So NASA is stupid enough to drastically change the shape of continents and the color of the water and land, all while trying to deceive billions of people!

Alas that the perpetrators of conspiracy are both the most clever and most incompetent of all humanity.

Perhaps there are more reasonable explanations. Perhaps the camera technology on satellites and rockets has changed over the years, or perhaps hue and saturation can be changed on their cameras just like ours, modifying the colors of earth in NASA photos. Perhaps the location of the camera and distance from earth changes perspective in a shot a bit:

Perhaps NASA openly admits when an image is a composite, or “synthesized view” of the earth taken pixel by pixel on multiple orbits around the globe, resulting in a strange, distorted view like this:

This is a truly interesting conspiracy theory because little explanation for motive is offered. According to theorists, the truths about JFK, the moon landing, and 9/11 are hidden because someone wants to hide their crime, and the truth about aliens is hidden to prevent mass panic. But why would governments around the world collaborate to convince the masses the world is round, not flat? What’s motive? What crime is being covered up? Who profits from keeping reality hidden? How is their power increased?

No sensible explanation is offered.

When debunking the moon landing conspiracy theory, Donald Sinclair wrote, “The size of a conspiracy is inversely proportional to the odds of it remaining a secret.” In other words, the more people involved in a conspiracy, the less likely it will succeed.

The flat earth conspiracy would necessarily have to involve more conspirators than any theory we have examined thus far. It would have to span centuries, including generation after generation of hoax makers…it would involve governments across the globe…any person who has ever recorded images of or traveled into space or a certain altitude in the atmosphere…anyone who has circumnavigated Antarctica…an army of scientists.

Reign of error and confusion indeed.