The mug shot of Brock Turner, a Stanford University student convicted of raping an unconscious, intoxicated woman, has at last been made public, after intense criticism of media agencies using a photo of Turner in a suit, hair neatly combed, with a disarming smile. The mug shot emerges 16 months after his initial arrest in January 2015.

Why wasn’t the mug shot used instead? Why did it take so long for the authorities to offer it? The Chicago Tribune explained:

Confusion over which agency’s responsibility it was to release the photo appeared to be behind its absence, the Cut reported. The Stanford Department of Public Safety initially arrested Turner. The case was then handled by the Santa Clara County Sheriff’s Department. Spokespeople for both agencies told the Cut and others that only the other agency could release the photo.

Giving the excuse of simple incompetence the benefit of the doubt, the use of a flattering photograph for this suspected and then convicted rapist raised the issue of whether white suspects and black (and brown) suspects are treated in an equitable manner in the American media.

There is no question that racial prejudice, whether conscious or subconscious, plays a large role in our society, in countless ways leaving blacks and other minorities disadvantaged in the realms of employment, healthcare, education, housing, the criminal justice system, media representation, and so on (a summary of the research confirming these problems can be found on Weekend Collective). For example, blacks convicted of crimes endure longer prison sentences than whites who commit the same crimes. (The 6-month sentence — possibly less if he behaves — for Turner enraged many Americans, some wondering if a black person would have received the same; when a black athlete at Vanderbilt, Cory Batey, raped an unconscious woman, he got 15-25 years minimum). As a second example, studies show blacks are featured in news stories on crime way out of proportion to the percentage of crimes they actually commit; this reinforces negative stereotypes about “violent,” “criminal,” “dangerous” blacks in the minds of media consumers.

As far as mug shots go, the research on differences between use of mug shots for white and black suspects seems to be scant. A 2002 study published in Journal of Research in Crime and Delinquency called “The Racial and Ethnic Typification of Crime and the Criminal Typification of Race and Ethnicity in Local Television News” found that black suspects are more likely to be featured in mug shots than white suspects, as cited by Kelly Welch. More research is perhaps needed to best understand the scope of the problem, but if there is a problem it will, like other ways in which blacks are portrayed in the media, have an effect on white thought. A study from Stanford — Turner’s own university — found that when whites were exposed to a disproportionate number of black mug shots, they supported harsher incarceration policies than when they were exposed to mostly white mug shots.

Serious research should be our guide to understanding if a problem exists, how bad it is, its cause (issues like mug shots are likely due to subconscious biases, pro-white and anti-black, that most people have but don’t even know it), and what can be done to create a more just and equal society. But sometimes, anecdotal evidence can hint at a problem (not always confirmed by scientific experiments and evidence). And there is no shortage of anecdotes, briefly examined here. Images tell stories, and we should perhaps be more careful about the stories we tell. 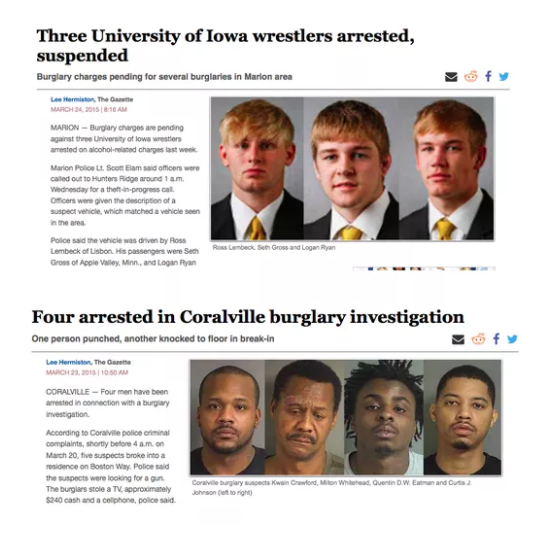 The Iowa Gazette last year featured back-to-back news stories of burglary arrests, one with mug shots of black suspects, the other of yearbook photos of white suspects. It is entirely possible, as one area resident insisted, that mug shots took longer to get from the Iowa county where white men were arrested, whereas the county where the black men were arrested provided mug shots online almost immediately. Regardless, this difference — clean cut, dressed up whites verses casually-dressed blacks, one with a bandaged face — is something journalists must work to avoid, even if it costs time. Apply the same standard to all races, use mug shots for all races, in the interest of equal treatment. Journalists aim to be fair and balanced, and this a noble way of accomplishing that goal.

Media Giants and the DuBose Murder

Cincinnati police officer Ray Tensing was declared guilty of murdering an unarmed black man, Sam Dubose, last year. Yet NBC News, People’s Magazine, BBC News, and other media outlets used a mug shot of Dubose — from an entirely unrelated arrest! Could they not have given the victim a bit more dignity, asking for a photo from a family member? In the NBC News version, among others, one might wonder who exactly the victim is at first glance. Tensing, rather than a mug shot after his arrest, is granted his police photo — smiling, confident, a patriot. One might ask how this all would have gone had a black police officer murdered an unarmed white, with a previous, unrelated arrest on his record.

The death of unarmed Michael Brown in Ferguson, Missouri, besides the obvious criticisms, drew much attention to media decision-making concerning photographs. Photos of him scowling, or showing a peace sign, were prominently used. At the time, it was unclear as to whether Brown physically struggled with police before he was shot, causing much controversy. Compare this to the mass shooter James Holmes, who shot up a theater in Aurora, Colorado, in 2012, here featured in a school photo. Was there no school photo of Brown in existence? Is a flattering photo just for someone arrested for a mass shooting, not for a dead man whose death was shrouded in controversy? Surely media outlets can do better. (Note also the rather flattering headline for the white mass shooter, another large difference in treatment of the races, examined elsewhere; much attention has likewise been drawn to Turner’s accomplishments in athletics and academics.)

If they gunned you down, what photo should they use?

Looking at media use of photographs of Dubose, Brown, and others, it should be no surprise African Americans created the #IfTheyGunnedMeDown discussion on Twitter, which juxtaposed personal photos of themselves dressed down, flashing hand signs, with more serious demeanors, verses themselves in suits, smiling, celebrating accomplishments. If we create a common standard for arrested persons, such as, “No matter your race, the media should print no images except mug shots,” surely we can also establish one for people who die in confrontations or mere benign situations involving the police. For example, “No matter your race, the media should print yearbook photos or other respectful photographs.” We can be more careful, and more equitable, about the stories we tell.